At the end of our last quarter, we asked the players as part of our check-in question: “What is a lesson you could learn from your character?” 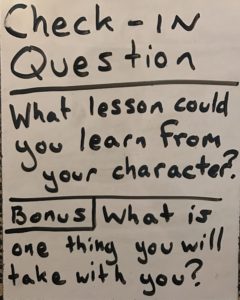 We ask check-in questions at the beginning of each session.  They’re a great ritual to start the day, and provide an opportunity to reflect on how players are similar to and different from our characters.  Over the course of the 10 week quarter, we guide the participants to think about the traits their characters have that are desirable and some that are not desirable.  After all, our characters are played by us, so they must be a reflection of us in some way.  The quarter culminates in this final check-in question where players are invited to think about how they will translate some of their character into their own lives.  Sometimes the lessons learned are ways to be more like a character, and sometimes less, depending on how the player has created their character.

The responses were beautiful.  It really was a reflection on the power of tabletop role-playing games like Dungeons and Dragons as a tool to develop social skills, build friendships, and provide the opportunity for participants to do something deeply enriching.

Here are a few answers that stood out this quarter:

“A lesson I could learn from my character is to be more confident.  He doesn’t care what people think about him. I avoid people.  He doesn’t.  I want to be more like that.”

“A lesson I could learn from my character is to try new things without worrying so much.  He’s really good at taking risks.  I sometimes worry too much and don’t try new things.”

“My character gets in lots of trouble because he’s really impulsive.  I could learn from him to think before I act.”

“My character knows what she’s responsible for.  I think I sometimes take on too much responsibility.”

“My character is forward about what he wants.  I could learn from him to do that too.”

“I could learn from him to think about the consequences of my actions before I do something.  He gets into trouble a lot and I do too.”

“My character sometimes tries to do everything by himself, and he could really rely on other people more.  I could also.”

Are there any lessons you’ve learned from a character you’ve played?  Do you have a story to share?  Please let us know!  Send us an email or reach out via Facebook or Twitter!

Interested in our social skills groups?  Send us a message!