Theory of Mind, a commonly accepted belief in developmental psychology, is centered around the ability to understand that you have thoughts, beliefs, and desires, and that others also have those things, and they might not be the same as yours. In other words, it is the understanding that other people have a different understanding than your understanding. Psychologists designed a test to help others understand this concept (and to prove that it exists in the first place) called “The unexpected contents test.”

The test starts off as all good psychology tests do, with unassuming child participants and psychology techs in white lab coats. The tech presents a box of candy to a young child, maybe around the age of 3 or so. The scientist then asks the child, “What do you think is inside the box?” while trying to sound as little like the scene from seven as possible. The child usually responds, “Candy” since that is how the box is labeled. Suddenly, the cruel psychology tech opens the box to reveal that the box is not candy, but is instead colored pencils! The child is shocked and maybe a little unhappy since colored pencils are often a distant second to candy. Here is where the test gets interesting. The researcher closes the box again, and asks the child, “If I ask your friend what is in this box, what do you think they would guess?” And the child will respond with full conviction saying, “Colored pencils.”

At the age of 3 this child has not yet developed Theory of Mind skills. He or she doesn’t yet understand that her friend has a different set of knowledge than her own and can’t comprehend the concept, yet, that her friend would be fooled by the same ruse that tricked her. This is because humans are not born with this idea embedded into their minds, they develop it. When this test is repeated for older audiences, the results turn out differently. A child who is 7 or 8 years old will almost always respond with a guess of “candy” and understand that their friend will be fooled in the same way that they were fooled.

Theory of Mind is important. It is the foundation to the idea that we are constantly working—and often failing—to understand and interpret the thought process and knowledge of those around us. Since we aren’t born with this understanding, we must practice it.

Even as adults we find that there are times when we don’t understand those around us. When you resolve a fight with your spouse or work desperately hard to get along with a coworker, you’re practicing perspective-taking and theory of mind skills. Those moments where you aren’t the most stellar example of human understanding and patience — that is practice too. 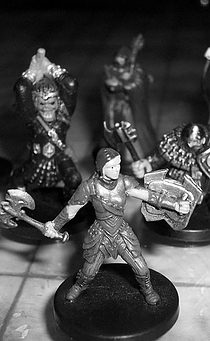 Part 0: What Exactly Is a Tabletop Role-Playing Game Anyway?